Chat with us, powered by LiveChat
Skip to content

The Main Reasons Why Older Men Get Plastic Surgery 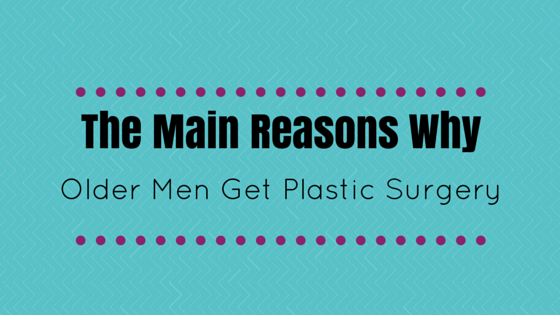 When it comes to beauty and looks, women are normally pinpointed as the ones most occupied or concerned by it. But they’re not the only people who spend time and money on their appearance. Increasingly more so, it’s men in their 40s and 50s who are shelling out cash to stop their signs of ageing.
However, not everyone agrees with men getting plastic surgery. Male celebrities like Liam Neeson and George Clooney have made public statements about their reluctance of ever getting plastic surgery. Clooney shared his thoughts on men dyeing their hair and getting plastic surgery in a BBC interview:

I’ve seen it happen—particularly on men—I don’t think it really works; I think it actually makes you look older. I’m a big believer in the idea that you can’t try to look younger. You just have to look the best you can at the age you are.

Neeson was later quoted in the Daily Mail saying “Ageing should be done gracefully. I agree with George that the best way to grow older is not to get any work done to your face.”
Let’s not forget these guys are major celebrities though—they’ve made a good living and should be well off if for some reason they never landed another movie role. That’s not quite the case for regular folks. There’s pressure to look young or attractive in the workforce.  That’s one of the main reasons why older men get treatments like Botox Injectables; they want to look youthful to compete with colleagues who are decades younger.
According to the American Society for Aesthetic Plastic Surgery, the number of men getting surgical and non-surgical treatments in 2014 went up by 43% compared to the previous year. To put that further in prospective, the number of procedures performed on men has increased by 273% since ASAPS began collecting statistical data in 1997.
Dr. Mulholland, a Toronto plastic surgeon, says most of the male clients he sees are in upper management or senior positions at work. He says that men are subject to ageism, as women have been for so long. “These men are seeing signs of ageing that make them look tired, which projects lack of confidence or lack of ability to negotiate in the boardroom,” says Dr. Mulholland. To top it off, younger male colleagues “nip at their heels” and are more than ready to climb the work ladder.
Another big reason why older men seek treatments is that they want to attract younger women. Men in their 60s who are freshly divorced find themselves back in the dating market. Dr. Mulholland says these men tend to gravitate to women in their 30s or 40s. That alone is enough to push men to look into cosmetic treatments.
Most men tend to avoid surgical procedures—the most popular non-surgical treatment for men at SpaMedica is Botox Injectables. Laser treatments to smoothen wrinkles and skin are also popular. ASAPS reports that blepharoplasty, male breast reduction and facelifts have increased dramatically over the past 5 years for men, though.
So let’s cut the ladies some slack. Men are increasingly preoccupied with their looks and it’s mainly for work or romantic opportunities.

How much does CoolSculpting Cost?

How much does botox injectable cost in Toronto?